Jan. 26, 2019 — On Jan. 23, Florence Area Chamber of Commerce held the 11th annual Siuslaw Awards at the Florence Events Center to honor local individuals and businesses for their contributions to the Siuslaw region.

“I’ve lived in several cities and I’ve pastored several churches, but I don’t think I’ve ever lived in a community that has shown itself to be so outgoing, accommodating and loving people as this community,” said Pastor Dale Edwards of Cross Road Assembly of God, who gave the invocation to begin the evening. “Tonight, we’re going to recognize individuals and businesses that really epitomize who Florence is in so many ways. There is a saying, ‘You can’t cross the sea merely by standing and staring at the water.’ Those that are going to be honored tonight don’t stand and stare; they go and do.”

Chamber Executive Director Bettina Hannigan led the evening’s program, which consisted of appetizers, wine, the State of the Chamber and the presentation of the Siuslaw Awards.

“I appreciate each one of you for your support to your dedicated businesses and services,” she said to the attendees. “Each nominee is a winner in my book.”

Chamber President Russ Pierson delivered the State of the Chamber Address, reporting that there are more than 350 active members of the Florence Area Chamber of Commerce.

“We’re doing everything we can to build our businesses with solid training, networking, advocacy and more each and every day of the year. Our chamber, like our community itself, is driven by spirit of service and collective collaboration. This results in a veritable swarm of amazing volunteers,” he said. “As I’ve come to know the extraordinary people in this uncommon place, I have to say it is truly a pleasure to live here and serve here with each one of you. Friends, the state of our chamber is strong, our prospects are bright and each one of you is amazing.”

The first award given was the Distinguished Service Award, “only presented in the most extraordinary of circumstances,” Pierson said.

2012 Florence First Citizen John Bartlett, who also served as president of the chamber board, presented this award.

“To me, the Distinguished Service Award is all about touching lives. It’s when the board recognizes an individual or business that selflessly gives their time and efforts in supporting the FACC, this community and the people of this community. Tonight’s recipient has touched many lives,” he said.

John continued by saying the recipient has built strong relationships, shown diplomatic talent, served three years as chamber president and worked tirelessly to train and support the chamber’s director and board.

“If you think you’re too small to make a difference, then you’ve never been in a room with a mosquito,” he said. “Tonight’s recipient is not tall in stature, but in her family and among her friends, she stands very tall. And I think I can speak on behalf of her family when I say that they are very proud. The 2018 Distinguished Service Award goes to Jenna Bartlett.”

Jenna is the publisher of Siuslaw News and John’s daughter.

She said, “When I moved to Florence, one of the first things I did was join the chamber and almost immediately joined the board. I have never regretted that, no matter what. I’ve been honored to serve as a chamber member.”

She thanked her mentors, Dee Osborne, Cindy Wobbe and Lisa Walter-Sedlacek — “three really strong women” — for their support and guidance in her time with the chamber and in Florence itself.

The chamber invited Matt Templeman, news anchor with KEZI in Eugene, to present the awards.

“I thought to change things up and keep things fun, I’d give Matt a call,” Hannigan said. “He said, ‘I’d love to come. I love Florence!’ He said he loves to come and the meet the communities he talks about.”

Templeman said he and his family often visit the coast.

The first Siuslaw Award presented was the Non-Profit Achievement Award, which went to Florence Habitat for Humanity.

Habitat Executive Director Janell Morgan and members of the Habitat board accepted the award.

“We’re just really excited,” Morgan said. “I couldn’t do this without my awesome board of directors who have supported us every step of the way and our volunteers. So many of you have volunteered. We’re in the process of building a house right now, so come on out. Help us drive some nails and get this house painted.”

The second Siuslaw Award presented was the Community Caring Award, which went to TR Hunter Real Estate. Owner and principal broker Tim Sapp and members of his team accepted the award.

On stage, Sapp said he had a hunch that he might not win, so he talked with Pastor Dale about praying.

“And it worked!” he said. “This is wonderful, and thank you very much.”

The third award, Curb Appeal, went to City of Florence Public Works and its newly completed location at 2675 Kingwood St.

Florence Public Works Director Mike Miller said, “This facility has been a long time coming for us. It’s been about a 12-year stretch for me to get this facility built. It is now the cornerstone of Kingwood Drive and 27th Street. We’re very proud of it, the city is very proud, and I think the community should be very proud of it too. It has great design, great lines and it was built not only for now but for 50 years in the future.”

The Customer Service Award went to Heceta Head Lighthouse Bed and Breakfast, owned by Michelle Korgan, whose family has owned the B&B for 23 years.

“Every single person who comes into the Keeper’s House still thinks of it as a home and are taken care of so well,” she said. “People from our area and from the ends of the world come in and they get to appreciate that home as a home because of these people.”

She gestured to the B&B staff and volunteers, who together are helping commemorate Heceta Head Lighthouse’s 125th anniversary this year.

Templeman’s next award was the Innovation in Business Award, which went to the Florence Public Art Committee.

Committee member Jennifer French could be heard saying “We worked our butts off!” as they came to the mic.

Committee spokesman Harlen Springer emphasized that the committee is made up entirely of volunteers who work with City of Florence staff and the Florence Urban Renewal Agency.

“We are working on helping to beautify the city. Hopefully you’ve seen some examples of that. We’re trying very hard to use art and culture as an economic driver here,” he said. “In everything we do, we want you to see the ‘wow factor.’ You’re not always going to agree with everything we do. This is art, after all. We just want you to know that the people you see here are thorough and conscientious and dedicated to what we’re doing and we’re going to keep doing it.”

The final Siuslaw Award presented was the Stu Johnston Business of the Year.

Templeton said, “This award is given to a business that has demonstrated long-term business success and has actively shown strong community involvement. They are described as being an influential part of the community in every way they can.”

The 2018 recipient is the Siuslaw News.

Jenna Bartlett led the way back to the podium with members of the newsroom and marketing team in tow.

“We’re so honored to receive this award. We go to work every day with the purpose of giving you guys local news, good or bad. It’s not always easy. But we are here to serve the community, and we could not ever do that without your support,” she said. “We’re just thankful.”

Editor Ned Hickson followed by saying, “We go to work every day as a team. From the newsroom to advertising, we get together and support each other. More important than that, we feel so much support from the community. We’ve done some stories that have been controversial … in the end, what’s important is that we have these conversations. We want to always be there to be the springboard and the foundation for the conversations that need to happen in this community — good or bad. We can’t fix what we don’t know, and what is already fixed we need to recognize. So thank you.”

The final two awards recognized residents who routinely go above and beyond with their service to the community. The Florence First Citizen was first awarded in 1967. The Future First Citizen designation started more recently.

“It will be interesting to have our first Future First Citizen become our First Citzen at some point,” said Siuslaw School Counselor Steve Moser. “That might take a little time, though.”

“I’d like to thank the chamber for allowing us this opportunity to highlight some of the truly amazing students we have attending our high school this year,” Grzeskowiak said. “Tonight we have the pleasure of introducing four very talented, passionate and deserving high school students.”

Moser added, “Unfortunately, there can only be one awardee.”

“Audrey is an exemplary student in every way possible. From school staff to her peers in classes, she is a shining example of when ‘good enough’ is never enough. Always looking to do more, Audrey looks to maximize every aspect and resource available at Siuslaw,” Moser

When Audrey came forward, she thanked her family.

“They taught me how to be a good person,” she said.

2017 Florence First Citizen Rachel Pearson gave a brief presentation on her year as the area’s representative, talking about her pride in the Siuslaw High School Band and her involvement in the annual Rhododendron Festival. Her next event happens to be the Winter Music Festival, taking place this weekend at the Florence Events Center.

“If you ever want to know about our town, walk in the Rhody Parade and shake hands with people,” Pearson said. “It is amazing, and people respond to that. You will see what this town means to us and to the world.”

She looked over the Siuslaw Award attendees.

“I see so many good works in this room, and so many people who need awards,” she said.

Osborne said she was incredibly grateful for the honor.

“I’m a third-generation Florence gal. After going through school here I left to find my destiny, which brought me back to Florence. After seeing many different places, I found a new love for our town,” she said. “I started volunteering after seeing a need to help provide food baskets. From there it’s kind of just a blur.”

Over the years, Osborne has been involved in the Florence Rotary Club, which nominated her, and many other service groups. She gave thanks for them all, as well as her family, friends, coworkers and employer Banner Bank.

“Being involved has allowed me to meet so many who are willing to give. I always wonder how they do that. How do they do what they do? If you go to Florence, wherever you go, there’s a volunteer,” she said. “This town is run by volunteers. So where would we be without the people that are willing to give their time? I am really proud to call this home.

“Thank you to everyone in Florence for being part of this community.”

Community and service are just two aspects that the Florence Area Chamber of Commerce seeks to promote.

“We work hard to be Oregon’s coastal playground and make sure that the big influencers know we’re here,” Hannigan said. “The Florence Area Chamber of Commerce is strong, well-equipped and well-visioned for the future. We look forward to sustained economic stability, abundant resources for every need and continued successful partnerships with our fellow stakeholders.”

The Siuslaw News wins Business of the year: 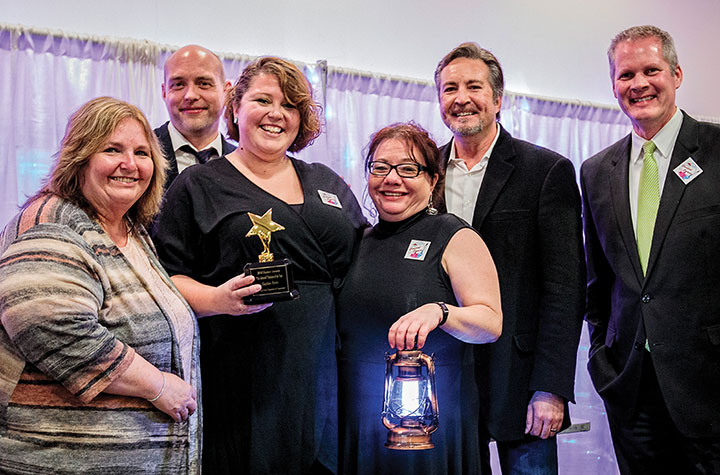 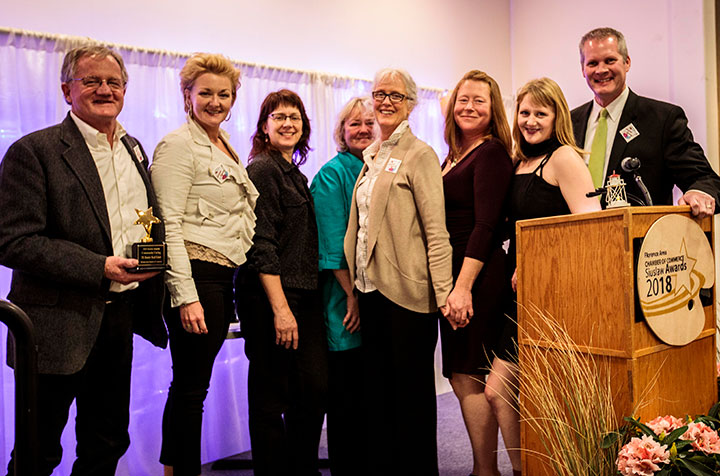 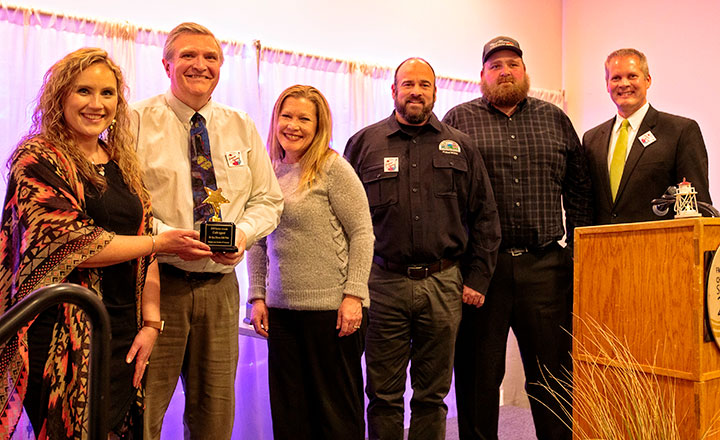 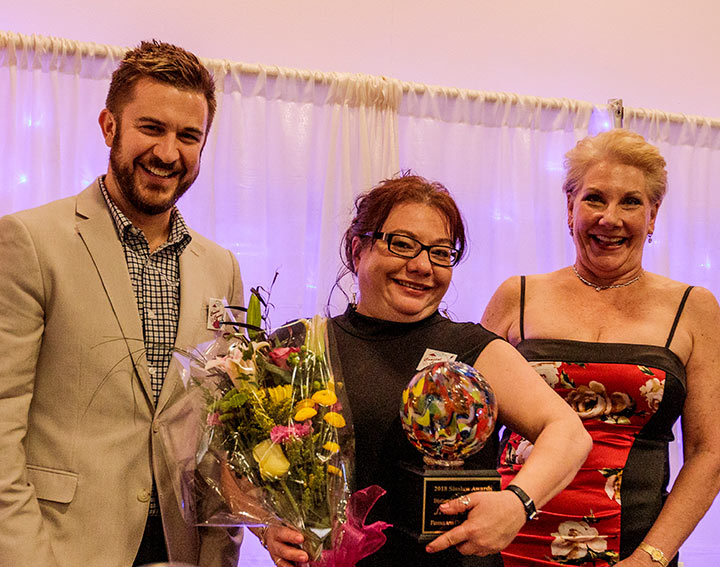 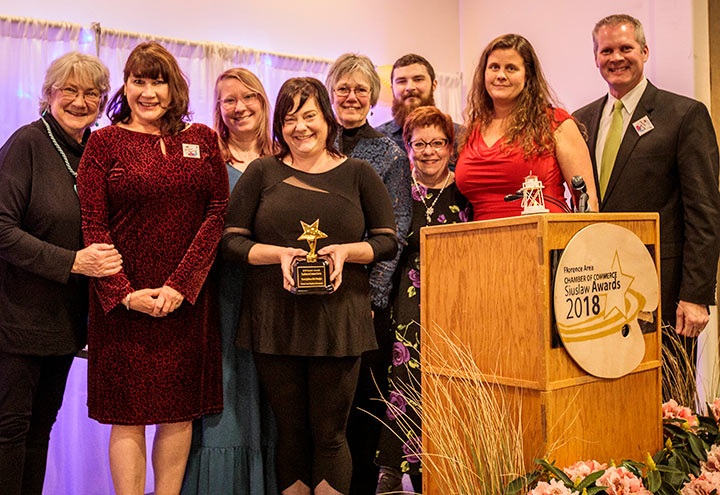 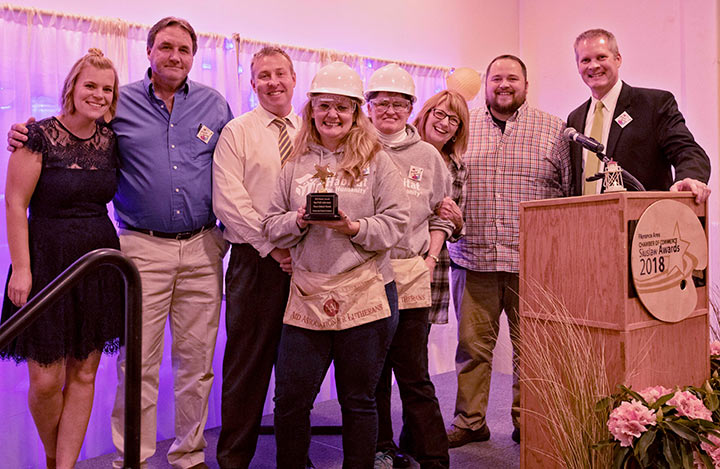 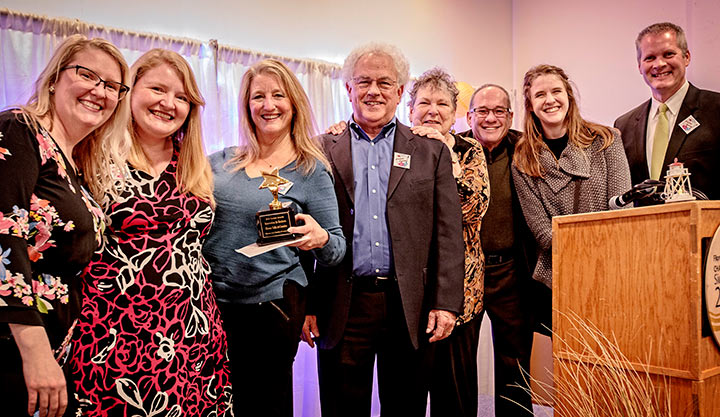