Dec. 8, 2018 — Sometimes bad stories have unexpectedly good endings. That is certainly the case from the perspective of local veteran, Tony Cavarno.

“I really can’t believe we got it back. I thought that it was probably gone for good, melted down and sold,” Cavarno said. “I am really surprised to see it here in one piece. It really is amazing!”

Cavarno referred to this week’s return of the Veteran’s Memorial Park’s engraved brass plaque, missing since early November. The plaque was hung in 2004 to dedicate the Florence’s park honoring area veterans on Bay Street in Historic Old Town. The plaque is one of the park’s central elements and included a list of the people involved with the creation of the park.

Cavarno was one of five veterans who gathered Wednesday to discuss the return of the plaque to Florence and to plan for its reattachment to the wall. These veterans have been involved in the conception and ongoing maintenance of Florence’s park, and they are relieved the missing plaque was located and returned.

“There was no major damage done to the plaque,” said Bob Woerner, another founding member. “We are still gonna have it cleaned up and resurfaced before we put it back up on the wall.”

The heavy brass plaque was taken just prior to Veteran’s Day last month. Once it was discovered missing, Cavarno headed up plans to start raising money to replace the sign. That effort will no longer be necessary, much to the relief of Cavarno and his compatriots.

What will be needed, however, is a more permanent way to attach the plaque to the Memorial Wall to prevent a future theft.

The veterans talked about the work that went into creating the park, based on a discussion, more than a decade ago, that took place at The Old Town Coffee Shop, a regular meeting place for the group.

Together, the veterans agreed that there was a need for a long-term tribute to service members that lived in Florence — and the idea for the park was born. The park has since become Florence’s central public location for tributes and ceremonies related to veteran affairs and patriotic holidays.

In November, Cavarno took the lead in reporting to the police and to the community the loss of the dedication plaque. His police report, along with a story published in the Siuslaw News and social media alerts, were shared across the state. These reports may have played a part in the return of the plaque.

“I think whoever did this may have seen this on Facebook and thought, ‘I better get rid of this thing before I get arrested,’” Cavarno said.

The second part of this story takes place in Brookings, a small town in Curry County, Ore., near the California border. It is similar in many aspects to Florence in a number of meaningful ways, including population size, history as a timber town and strong ties to the military and the first responder communities. Perhaps most importantly, there is a small-town ethos that infuses the manner in which people treat one another.

This is a case where that type of small-town concern allowed for the return of a piece of metal that was much more than a sign on a wall.

One of Brookings neighborhood parks, Azalea Park, is where an observant city employee, Jay Trost, noticed an unattended backpack. He checked out the contents of the backpack, read the plaque discovered inside and quickly contacted the Brookings Police Department.

Officer Rob Johnson was assigned to the case of the plaque in the backpack and he immediately knew he had found something that needed some closer attention.

“We got a call of a suspicious package sitting in Azalea Park and we knew after looking at the plaque and reading it, that we had found something that would be important to return,” Johnson said. “So, when I got back to the station, I gave the Florence Police Department a call and I talked with the case officer there. We started figuring out the best way to return it.

“It is heavy, so the cost to ship was a consideration, but we just wanted to make sure it got returned as cheaply and as quickly as possible.”

Brookings is 156 miles south of Florence, or about a 3.5-hour drive.

The department then called Cavarno, giving him the news the plaque had been recovered and was waiting for pickup.

The next to last step in the journey of the missing plaque required a call to West Coast Autobody and its owner Rick Ruede.

Cavarno updated Ruede on the plaque’s journey and expressed his concerns about the shape the plaque was in.

“It’s been up there for nine years and it’s starting to show signs of wear,” Cavarno said. “Over the years, especially with the weather outside there at the park, it was starting to weather.”

Once he had been brought up to speed, Ruede agreed to clean, polish and reseal the plaque free of charge.

“Basically, it was scratched up and the brass wasn’t shiny anymore, so we cleaned that up and we polished it up, so the brass was showing through again and it shined up nice,” Ruede said. “I’ve dealt a lot with these vets and I know so many of them personally. I just wanted to help if I could. I really like to support the local service groups and these guys in particular.”

Cavarno is clear what the last step in the process of recovering the plaque will be.

“The next step we are going to take is we are going to procure some one-way screws and drill lead shields into the block walls and mount it that way, so this doesn’t happen again,” he said. 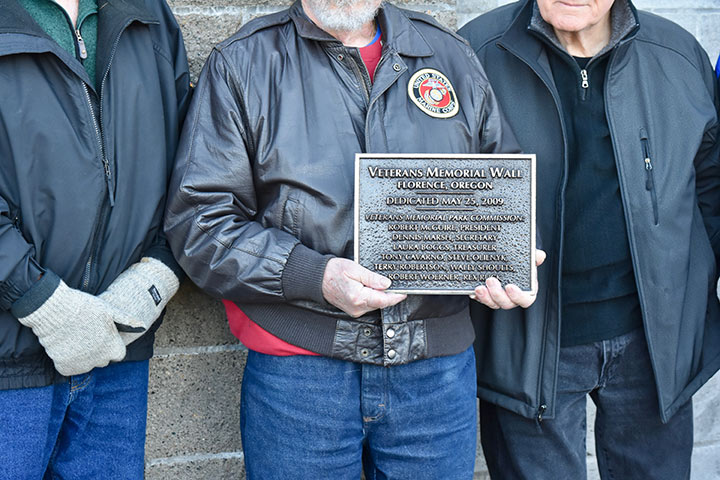 Turning to the next page