It’s the breathtaking, giant sequoias that people notice first when they enter the main grounds of the Deadwood Cemetery.

Hidden on a hill overlooking a river and surrounded by the majestic trees, the cemetery exists in another world only found in fantasy novels.

Just beyond the sequoias are the graves.

In the morning, the rising sun passes through the trees, casting beams of light on headstones creating a haunting yet peaceful aura.

On June 22, Deadwood Pioneer Cemetery Board of Trustees was awarded $5,860 grant from the Oregon Parks and Recreation Department’s Historic Cemeteries. The grant will pay for new headstones to replace 35 decayed markers.

The project is only a component of a larger push to restore the cemetery.

The cemetery is a small gravesite, its origins dating back to the turn of the 19th century. A church and a school used rest next to the site but were lost to time.

The park is impeccably kept, important for a State Historic Cemetery designated area. A massive, 7-ton entry rock displays that moniker as you enter its windy entrance road.

A new water irrigation system has been put into place. The grass is trimmed perfectly. It’s a beautiful monument to the rich history of the area.

It didn’t used to be this way.

The cemetery, which has around 300 graves, fell into a state of disrepair over the years. This was of particular concern because it was still hosting new burials.

However, its decay was not for a lack of trying.

For a time, the Deadwood Pioneer Cemetery Board of Trustees consisted of only three people: Don Wilbur, his daughter Sally and Gary Burnett.

Wilbur’s family had taken care of the cemetery for decades.

The three-person board, made up of volunteers, worked diligently to care for the grounds.

It was hard labor, though, and expensive. They had to dig the graves, manicure the grounds, care for the road leading to the site and various other clerical and physical responsibilities.

When Sally passed away four years ago, the task became overwhelming. The trustees needed help to revitalize the historic site.

Gerber was asked to be the secretary for the board meetings, which began to catalog the issues with the site.

In time, the trustees introduced new rules and guidelines.

Grants helped fund cemetery mapping, a new website and signage to direct travelers to the destination.

One of the major problems the cemetery faced was the use of temporary markers.

Occasionally, families were unable to put up permanent headstones for various reasons, usually financial. Small blocks of diverse materials — primarily stone and metal — with simple phrases were placed instead, with the intention of purchasing proper headstones down the road.

But for years, in some cases decades, only the markers remained. 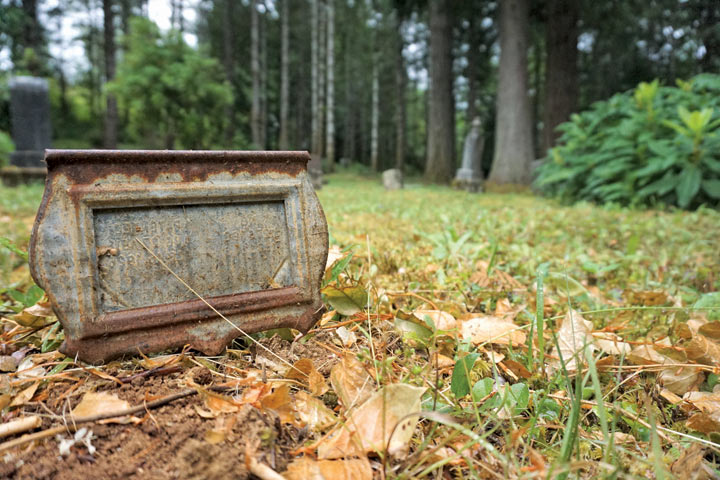 Sometimes the money never came through for the families. Other times they moved — or passed — away. As the families disappeared, so did the information on the stones.

In one instance, “Grandfather” was simply etched in stone, with no other identification.

Time could be unkind to these markers. In some cases, general wear and the infamous Oregon rains eroded the simple phrases, leaving no identifying information at all.

What the cemetery board needed was a good genealogist to trace these burials, and it just so happened they found one in Pat Rongey, a member of the Siuslaw Genealogical Society.

“Pat is awesome,” Gerber exclaimed. “She came on board three years ago with all these ideas. She’s really enthusiastic with people finding their heritage and has been a terrific source of information.”

Rongey and the board began making lists of the unknown headstones and unearthing names.

It was a painstaking process, tracking down relatives or searching obituaries. Most of the graves were identified. For those that weren’t, respectful but anonymous headstones needed to be placed.

The grant will pay for these.

While the headstone replacements are a major breakthrough, the board isn’t stopping there.

An annual Heritage Day is held, with Civil War reenactors invited to relive the first burial in front of a giant crowd who enjoy food, historical displays and educational games.

Of particular concern are the burials of veterans. There are currently 33 known sites held by them, dating back to the Civil War. A memorial is being designed to honor those, with plans to build on a newly sown area overlooking the river.

A gazebo is being planned to overlook the memorial. An ash scattering garden will also be placed, an important addition considering that the cremation rate is 48.6 percent of the population, according the Cremation Association of North America.

All of this has reignited interest in the cemetery. The board now has six members. Donations and volunteer labor have been given from people across the Siuslaw region.

Deadwood resident Kathleen Brooks said, “Rural areas run a risk for losing their identities. A place like the Deadwood cemetery is a link to our past. It’s a beautiful place where people can gather and have that link to the past.”

For Gerber, the ultimate goal is to have the site become a welcoming place for everyone to visit.

“It’s so the (community) can look after the people,” she explained. “To honor our heritage and the family members, and to make a place that is respectful.”

Anyone interested in volunteering, donating or researching are encouraged to email [email protected] or call 541-964-3345.