“Today it’s all about the tone — the way you guys sound,” Bruce Morganti told the Viking Gold Choir in class on Thursday.

Everything the choral students did in that class worked together toward building a unified sound, from warm-ups through the rehearsal of completed numbers.

“Don’t close off your ears to the person next to you,” said Morganti, who conducts the class from both behind the piano and from a music stand in front of a semicircle of students. “Listen really hard to them as you try to homogenize your tone. ‘What? I thought this was about being an individual.’ In choir, yes, you’re an individual, but you’re trying to create an individual sound out of 15 different sounds.”

Senior Heaven said, “The Gold Choir is basically like a chamber choir. We travel and are more advanced than the Blue Choir.”

Blue Choir is currently all girls — what Morganti called a treble chorus — but that is likely due to enrollment. It can be a nice first step for younger high school students or those who are inexperienced.

“You have to audition to get into Gold Choir, which is why we have freshmen this year,” Layla, another student, said. “There are some special times when (Mr. Morganti) is like, ‘Hey, you’re really good.’ For the Blue Choir, you can sign up, even if you don’t have experience.”

“You could also say it’s like JV and varsity,” one girl added.

Jack, a junior, said, “Cool kids who aren’t afraid to audition get in here. I haven’t had any musical experience in my life, but I auditioned here and got in.”

Jack is also a bass, which adds a lot to a choir of mostly girls.

The Gold Choir is also the competing choir at Siuslaw, with hopes to attend an Oregon School Activities Association (OSAA) festival in April to qualify for state competition.

“Both choirs are good,” Morganti said. “The other thing about this group — and you should see the other groups, they’re wonderful — but these students really are the most serious group when it comes down to working hard and wanting to be good. That’s the difference. They really have their eyes on the goal.”

In past years, Siuslaw High School has had enough interest to sustain three choirs. The school is building back in that direction thanks to Morganti’s instruction. He has help, too, in the form of his wife Mary, who comes in to play piano while Morganti gives individual attention to sections or students.

Specific pieces are required for the choir to learn for festivals. These feature complex harmonies and can require soloists, such as senior Patrick Rowley in “City Called Heaven,” to take center stage. While not every student will get the chance to have a solo, Morganti acknowledges the success of each individual.

“I nominated Danielle Goldblatt and two other students last spring for the Oregon Ambassadors of Music program,” Morganti said. “In late October Danielle mentioned to me that she had signed up, to my pride and pleasure. … Danielle is a hard-working student, a dedicated young musician and a pleasure to have in class.”

“I just love singing, always have. It’s fun and I get to express myself,” Danielle said. “I basically grew up in the choir at school. I’ve always loved choir and always did the extra choir programs that they had. With this opportunity, I will get to represent Florence and bring music and joy to other people in Europe.”

Danielle is the second Siuslaw student who plans to tour Europe as an Ambassador of Music through Voyageurs International, Ltd., this summer.

“The requirements to go into the program are being a good person, being responsible and being able to think,” she said. “And this is actually my second time being selected. I didn’t get to go my sophomore year because we were moving at the time.”

Students must raise $6,000 by the end of May to go on the trip. Siuslaw High School sophomore Lizbeth Garcia-Galvan is also planning to go — though her trip is largely funded already thanks to generous community donations.

“Danielle deserves any help she can get, too,” Morganti said. “She has had tremendous difficulty raising funds.”

According to Jennifer Goldblatt, Danielle’s mom, the family is relatively new to the area and hasn’t figured out the best way to raise funds here.

“We moved here from a small town, John Day in eastern Oregon, about two years ago. In John Day, the local stores allowed students to sell crafts or candy bars or raffle tickets as fundraisers in front of their stores. Every store I have contacted here has said that they don’t allow that,” Jennifer said.

While the Goldblatts have sold crafts at some local craft fairs, the amount raised thus far has been nominal. They said they would appreciate any help from the community, including ideas for ways they can continue to raise money on their own.

Beyond her love of vocal arts, Danielle also takes photos and participates in 4-H. She hangs her photos at Florence Regional Arts Alliance’s Art Center, 120 Maple St., and was a featured student artist last spring. Her art continues to be for sale there.

“I love being able to capture moments in pictures and being able to keep those forever. And I love sharing my experiences through my photography,” Danielle said.

For students from Siuslaw, traveling with the Ambassadors will be a once-in-a-lifetime opportunity.

“The program goes to seven different countries in Europe, and we sing in six of those. We go to Switzerland, Germany, Italy, France, England and Lichtenstein. And I believe this year there are 175 people going in band and choir,” Danielle said.

While performing abroad is a big part of the draw, she also looks forward to experiencing new cultures and learning.

“It represents Siuslaw High School in Europe,” she said. “Personally, for me, it will obviously be fun. I’ll also learn how to be a better singer by singing with all these other students who got selected. And I get to learn new music and experience a different culture. I want to learn how the music differs from country to country.”

Danielle also said she would bring as much of the trip back with as she could through group talks and her own photography.

Back in the music room at Siuslaw, Morganti continued to instruct students.

“You know, something is happening here,” he said when the students achieved his goal for the day. “You guys are really singing in tune. Can’t you hear it? You’re tuning to each other, which is what you’re supposed to do. That’s nice unison. Did you hear how it stayed in tune once the piano fades? Good for you. I don’t know why it’s happened.”

“Well, you taught us,” one student answered.

“It probably has something to do with being able to hear what we’re doing. The tone is better, and it’s all totally tied together,” he said. “Basses, you got lost, right? But you found your spot. It’s far more important to believe that you can correct. You can find your way.”

For Danielle, she still hopes to find her way beyond Siuslaw and into the wider world.

“Florence is beautiful and I love taking pictures of it,” she said. “Moving here has given me the chance to take pictures of the beach and all the waterfalls and stuff. I love it. And I like the school. Everyone is super nice. … I just hope people can support me to be able to represent Florence. We’ll learn a lot and learn how to become better singers. And I can shoot photographs in Europe and bring them back to share.”

For information on donating to Danielle’s Ambassadors of Music fund, contact Jennifer Goldblatt at [email protected] 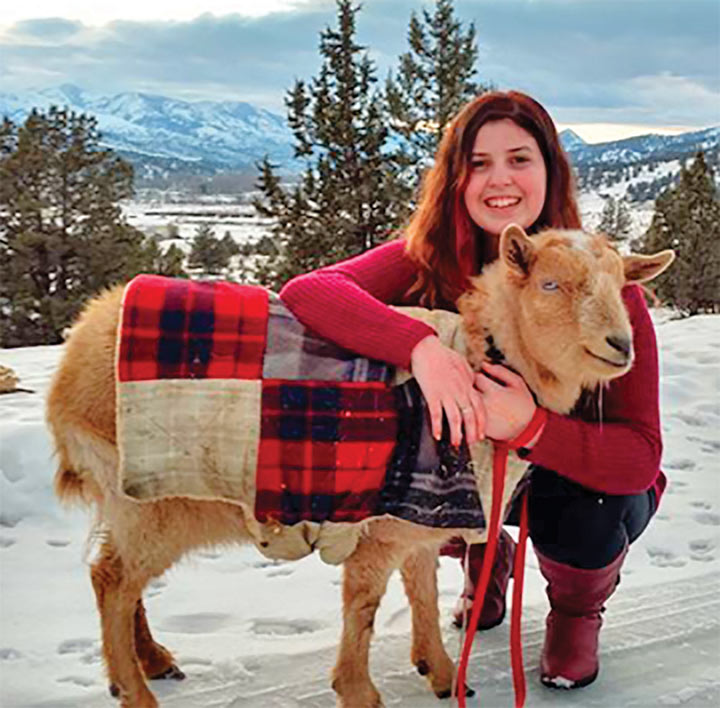