Oct. 8, 2021 — In 1957, Frank Herbert was a northwest-based freelance writer of fiction, non-fiction and speeches living paycheck to paycheck. He had published a book called “The Dragon in the Sea,” a novel about futuristic nuclear submarines. This was a mildly successful novel but wasn’t making enough for Herbert to support his family. Though he had made a foray into science fiction with “Dragon” and some short stories, in Herbert’s mind, this was not where the money was.

Herbert had sold the movie rights to “The Dragon in the Sea” to Universal Pictures for $4,000. Soon that money was nearly gone. With countless projects half done or sent out to editors and awaiting their decision, Herbert needed to find a financially lucrative project that would be of guaranteed interest to publishers.

A friend of Herbert’s, Phil Hitchcock, a professor from Lewis & Clark College and a former Republican state senator for Oregon, had heard about an interesting project being undertaken by the U.S. Forest Service, the Bureau of Land Management and Lane County in a small town on the Oregon Coast called Florence.

The sand dunes were putting the entrance to the Port of Siuslaw in peril, encroaching on Highway 101 and reducing valuable timber acreage in the Siuslaw National Forest. Nothing could stop them. Not cement. Not wood. Not trenches. Nothing. Something had to be done.

At the time, residents felt they were in a race to save their town and livelihoods.

In the late 1940s, a solution was found — European Beach Grass, or poverty grass as it was mostly called at the time, would be planted along roadways, streams, along property lines, anywhere it was deemed necessary to stop the dunes.

By the time Herbert had heard of the project, it had already been deemed successful and was being emulated by communities dealing with encroaching sand all over the world.

During the early years of the project, visitors came to Florence from Israel, Chile, India, Pakistan and Great Britain to view the project with hopes of bringing the idea back home with them. The idea intrigued Herbert and seemed like something that would interest others, specifically magazine editors who would pay him for pictures and an article investigating the project.

“The mystery of life isn't a problem to solve, but a reality to experience.”

In June 1957, Herbert chartered a Cessna 150 single-engine plane and pilot and flew to Florence. There, he spent a day taking notes, photos and video of the dunes and beach grass planting project.

His “tour guides” were Tom Flippin and Wilbur Ternyik, both employees of the Soil Conservation Service.

Ternyik spoke to the Siuslaw News in 2001 about his day with Herbert, whom he remembered as one of many interested parties, from all over the world, that he had taken on a tour of the dune restoration project.

“We spent the whole day together,” Ternyik said. “We didn’t get into anything about all these fantastic books he was going to write. He did have one request. He wanted to see some deer in the dunes. Luckily, I took him out to the Goosepasture and we saw a doe and a couple of fawns.”

As he flew away from the Oregon Coast and looked down upon the dunes, Herbert left knowing two things — that they had, in fact, stopped the sand and, more importantly, there was something about those sand dunes that he couldn’t get out of his head. 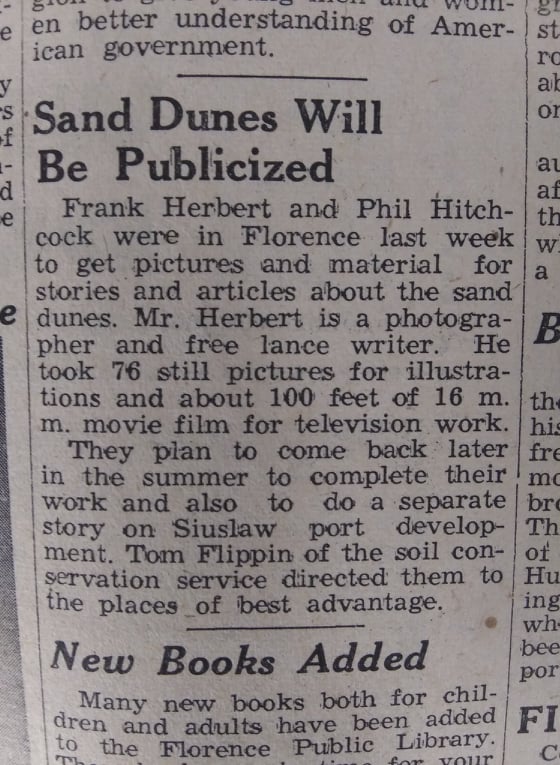 Herbert's visit to Florence was publicized in the June 21, 1957, edition of the Siuslaw News.

“Highly organized research is guaranteed to produce nothing new”

Herbert returned to his family, who had just relocated from Portland to Brown’s Point, Wash., just north of Tacoma, and began work on his essay that he entitled, “They Stopped the Moving Sand.” Soon he realized, though interesting, this nonfiction exploration on man’s attempt to reclaim what nature was trying to take back was only the tip of iceberg of his imagination.

In an interview in 1969. Herbert described when he realized he had something bigger than an essay on his hands.

“The way I accumulated data is, I start building file folders and before long I saw that I had far too much for an article and far too much for a story, for a short story,” said Herbert. “So, I didn’t know really what I had but I had an enormous amount of data and avenues shooting off at all angles to gather more. And I was following them. … I finally saw that I had something enormously interesting going for me about the ecology of deserts, and it was, for a science fiction writer anyway, an easy step from that to think: What if I had an entire planet that was a desert?

“During my studies of deserts, of course, and previous studies of religions, we all know that many religions began in a desert atmosphere, so I decided to put the two together because I don’t think that any one story should have any one thread. I build on a layer technique, and of course putting in religion and religious ideas you can play one against the other.”

Herbert did eventually finish “They Stopped the Moving Sands,” though it wasn’t published until many years later in a book called “The Road to ‘Dune.’”

Ultimately, Herbert changed directions and begin the long and arduous process of writing what many consider the greatest science fiction novel of the 20th century, maybe the greatest ever, “Dune.” For five long years Herbert worked on his opus which he was able to able to devote his full attention to because his wife was gainfully employed as an advertising writer.

“Deep in the human unconscious is a pervasive need for a logical universe that makes sense. But the real universe is always one step beyond logic.”

Maybe because he was unable, like is common with the human condition, to find logic in this “real” world of ours, Herbert created, in “Dune,” an entirely self-contained universe like never seen in science fiction writing previously.

This was like something never seen, heard or read before.

“Dune” is considered by some critics the greatest work of science fiction ever written. It has been translated into a dozen different languages and has sold over 20 million copies.

Scientist Carl Sagan, who found most science fiction unrealistic, said “Dune’s” stories were “so tautly constructed, so rich in accommodating details of an unfamiliar society that they sweep me along before I have a chance to be critical.”

“Dune” was a resounding success.

However, the dune reclamation project’s success is not so clear. There is no question the beach grass did in fact stop the sand. The problem is, once the grass was planted, it didn’t stop.

First, the beach grass began to take the space originally held by native plants. Then the beach grass started filling the nesting areas of native birds, like the Western Snowy Plover.

The European beach grass just kept spreading. To some, this meant the plan was successful. The sand was stopped, after all. Local infrastructure was protected and, for those with an interest in said infrastructure, the project was a success.

To those who understand what dunes need to survive, the European beach grass was a death sentence.

“For the dunes to exist, the sand needs to move,” said Bill Blackwell, a representative of the Oregon Dunes Restoration Collaborative in 2018. “If you’re out there, you can see it will look different from one day to the next. With the vegetation stabilizing things, the sand can’t move, which stabilizes the dunes and simplifies processes.”

The debate continues in Florence to this day. Some people feel the sand must be stopped. Others feel the priority should be maintaining the delicate balance between man and nature. Finally, there’s a large group that feel the European beach grass should be eliminated, completely.

“Any road followed precisely to its end leads precisely nowhere. Climb the mountain just a little bit to test that it's a mountain. From the top of the mountain, you cannot see the mountain.”

Like any great novel of the 20th century, it was only a matter of time before Dune would appear on the silver screen. With a novel as complex as this one that was easier said than done.

The first attempt was in 1984 by director David Lynch, known for films such as “The Elephant Man” and “Wild at Heart.” The film was a box-office bomb, grossing only $30.9 million from a $40 million budget. Though there is a cult following for the film, most critics believe it hasn’t aged well, as indicated by the 48% positive rating on rottentomatoes.com.

In 2000, the Sci Fi Channel produced a three-part miniseries called “Frank Herbert’s Dune.” For Herbert fans this was a much better representation of the novel than Lynch’s movie. It received much better reviews from critics, though some felt it was possibly too close of a representation considering the intricacies of the 500-plus page novel.

Emmet Asher-Perrin, a critic from Tor.com, an online science fiction and fantasy magazine, commented, “It doesn't reach spectacular heights due to the desire to be as close to the written text as possible and the narrative gets over-explained in an effort to be sure that no one watching is left behind (sic).”

“The mystery of life isn't a problem to solve, but a reality to experience.”
― Frank Herbert, “Dune”

With the third attempt at a “Dune” movie, to be released Oct. 22, 2021, there is hope that this is the movie that finally captures the spirit of the novel. Directed by Denis Villeneuve, four-time recipient of the Canadian Screen Award for Best Direction, early reviews have been good. Rottentomatoes.com currently gives it an 89% on its “tomatometer”.

Much of “Dune” was prophetic.

Many believe Herbert saw the future of warfare, politics, environmentalism, artificial intelligence, fossil fuel exploitation — this list goes on and on.

One thing he didn’t see was the cost that would be paid for “stopping the sand.” It’s likely he was simply in awe of man’s ability to control nature that he witnessed here in Florence.

City Lights Cinemas and the Siuslaw Public Library District are presenting the “Frank Herbert ‘Dune’ Celebration,” honoring the historical ties between the Florence dunes and the seminal science fiction classic that influenced a generation of books, music and films. Learn more at www.citylightscinemas.com/dune-celebration/.

Cause of fatal August home fire determined in joint Investigation