Jan. 8, 2020 — The community is invited to “join the madness” of Rotary Club of Florence’s annual auction on March 14. The theme, which was announced on Tuesday at the club’s weekly meeting at the Florence Events Center, will be “The Mad Hatter’s Tea Party: Hats off to our Students.”

What started out decades ago as a small event raising a couple thousand dollars to a gala which raised more than $109,000 in 2017, the Rotary Auction serves as a fun way for Rotarians and community members alike to enjoy a catered dinner while raising money for scholarships for students in the Siuslaw and Mapleton school districts. The auction in Florence netted $1,560,785.23 from 1960 to 2019.

At the start of each year, the Rotary Auction Committee presents the theme through a short skit.

Instead of the titular character, Laurel Ferguson acted as “Laurel in Wonderland,” meeting Bob Steele as the White Rabbit and auction co-chair Kim Erickson as the Cheshire Cat. The Red Queen, played by Jenna Bartlett, and The Mad Hatter, played by Rotary President Meg Spencer, also made appearances. 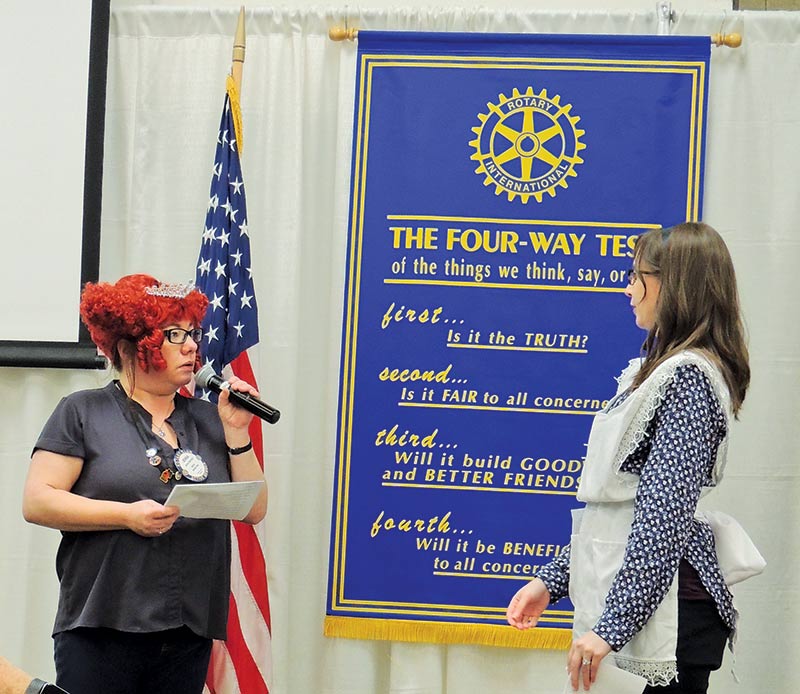 “I’m here today to thank each of you as Rotarians for what you do for local students. Each year, the Rotary Auction is much more than just fun. It makes this community a better place to live. And I have proof,” Ferguson said at one point in the play. “Yes, ladies and gentlemen, the evidence will show that your support is a chance to change the lives of local young people. You see, not too many years ago, I was one of those students.”

She went on to explain that a Rotary scholarship helped her with her schooling, which ultimately led to her return to Florence as an attorney at Hanawalt Ferguson, Attorneys at Law.

“Indeed, but for that scholarship, I may not be standing before you today,” Ferguson said. “I implore you, … make it possible for more young people to thrive and make this year’s Florence Rotary Auction the best ever.”

After this speech, The Mad Hatter announced that this year would be a special “unbirthday party” and unveiled the poster for The Mad Hatter’s Tea Party, which will begin at 5 p.m. on Saturday, March 14, at the Florence Events Center, 715 Quince St.

“Welcome to my tea party,” Spencer said. “They say it is a place full of wonder, danger and excitement. They say to survive there you have to be ‘mad as a hatter.’ Well, thankfully, I am.”

Auctioneers during the event will again be father-son duo Blair and Bob Sneddon, who have served as auctioneers since 1970 for Blair and 1989 for Bob.

In addition, a team of 24 Rotarians serve on the Auction Committee, and people are welcome to step in to help.

McMullen said, “Kim and I get a lot of credit for this, but we don’t do it all. It’s all of our committee members, the whole Rotary Club and everybody involved who puts this auction on. Give yourselves a great hand.”

Other ways to participate include donating teacups to the Rotary Auction Decorating Committee, who plan to use donated sets in displays and decoration. These will not be returned, as some sets may be permanently altered. People can also donate items for the auction and raise money through Rotary coin jars throughout the community. Money from the coin jars go to the President’s Scholarship.

According to Spencer, this year the scholarship will go to a student who works full time.

“Those kids are often students who have great skills to go to college, but who are not able to do the extracurricular activities that other kids are able to engage in,” she said. “Just know, when you are putting coins in your coin jars, that is the plan this year for the Mad Hatter Scholarship.”

At the end of the auction presentation, Spencer thanked everyone who participated in the skit. “I do love ‘Alice in Wonderland,’ and I’m so glad we get to play with it this year.”

The rest of the meeting continued topsy turvy, proving that Rotarians “are all mad here,” as several people said.

Siuslaw continues to adapt to online learning, plans for future