Aug. 3, 2019 — “A lot of these kids have no clue what they want to be when they grow up,” said Boys and Girls Clubs of Western Lane County (BGC) Executive Director Chuck Trent. “Introducing them to possibilities and lining up resources to help guide them, that’s the secret sauce.”

BGC’s yearly programming at the Elementary Program and Teen Center includes Summer Brain Gain, a nine-week national BGC program that seeks to minimize learning loss in the summer months off from school.

On July 29, 13 youth participated in the Teen Center’s version of the “Amazing Race” — a scavenger hunt challenge that required the teens to work in teams, solve problems, think creatively and run all around the BGC campus on 15th Street.

“This is the culmination of all the stuff that we’ve done with Summer Brain Gain up to this point,” Trent said. “Part of it is life skills, part of it is STEM, part of it is the food program and part of it is just teaching them to follow directions.”

As a reward, the final challenge was for the teens to follow a recipe to make homemade whipped cream to put on mini strawberry shortcakes. The winning pair went on to make additional ingredients to make desserts for some of the staff.

“With Dylan being the varsity basketball coach, he is obviously a positive male role model, which is really important. That creates an even stronger bridge with Siuslaw School District,” Trent said. “(Superintendent) Andy Grzeskowiak has been a phenomenal partner. He has just been a really awesome guy in being able to have that relationship with the school where we’re supporting each other. It’s not my kids or his kids — it’s our kids.”

Bonds will continue to grow between the club and the schools as fall sports get underway.

During the Amazing Race, the students were required to help with the Teen Center’s daily garden harvest. The eight garden beds contain pumpkins, corn, beans, flowers, cilantro, Swiss chard, spinach and potatoes. This winter, the beds will be covered to allow root crops to be grown.

“The kids started everything from seed, and they’ve done really well,” Trent said. “Many of the kids at the Teen Center had no idea where food comes from, other than a can.”

Now, the center is looking to expand to 12 garden beds for the fresh produce, which forms part of BGC’s nutritional requirement.

“We’ve had several harvests of Swiss chard, spinach and lettuce. The beans are ready to harvest now, and we have tomatoes and potatoes that are almost ready,” Trent said. “It’s all organic, we don’t use any chemicals on the garden. We’re trying to teach the kids that they can have this in their backyard, too. It doesn’t take but a little bit of space. It doesn’t need harmful chemicals.”

In addition, the Teen Center’s recent kitchen appliance additions have made food preparation easier and faster. The kitchen includes a prep table, fridges and freezers donated through a grant with the Department of Education, two ovens funded by Three Rivers Foundation and a dishwasher funded by Western Lane Community Foundation.

“This gives us a lot more options to be able to prepare healthy food,” Trent said. “This will take us up to well over 100 kids in the Teen Center.”

Club members with food handlers permits are able to help with meal prep, one of the more coveted jobs at the Teen Center.

“We assign every teen a job. That’s a requirement,” Trent said. “You don’t get to come here unless you’re willing to help.”

In the past, teens were assigned chores with a reward system of club bucks to spend at the club store. Now, every teen has an assignment, which helps the Teen Center with activity clean up, equipment management, dish cleaning and more.

“A lot of the kids will start with their first job in fast food,” Trent said. “Knowing how to prep, understanding the standards around food temperature, how to handle food, hygiene and all that kind of stuff helps them prepare for that.”

Teen Center staff member Kara said, “We decided to give them actual jobs to help with their future. Some of them are almost old enough for jobs, so this will be the first thing on their résumé.”

“Once these kids get out of high school, all of this lines up so that they have experience and knowledge that helps them be prepared to find a job that will pay livable wages and be able to keep that job,” Trent said.

The teens still get to use their earnings in the club store, which Trent said helps them manage their money, save and make informed decisions.

“We’re trying to be the tip of the spear,” he said. “If we’re going to do something to stop or greatly reduce homelessness, we start that in third grade. You have to start early. By the time they get into fifth grade, that’s when we’re teaching about managing money and teaching them how to live within their means.”

Last January, BGC elected to move fifth-graders from the elementary to the teen program. Now, the main campus building will be used for middle school students and the Nan Osbon Teen Center will be used for high schoolers. The building includes class and recreational space and a computer lab, as well as a pool table, a big screen TV and two vintage pinball machines.

Trent said the decision to move the fifth-graders up was easy when he saw how well BGC Elementary Program Director Sam Gauderman had taught the students to manage their after-school time.

Gauderman is a former “club kid” who went on to play club sports, join BGC as a part-time employee and eventually become a program director.

“Sam’s had most of them from kindergarten. She has them structured so that when the fifth-graders came up to the Teen Center, the first thing they did was put their backpacks away and sat down to do their homework. It’s just amazing to see the stuff they learned here and applied over there,” Trent said.

The Teen Center increases learning by providing a study tutor three days a week during the school year and giving structure to the after-school hours.

“With teens, they can choose to come or not come to BGC,” Trent said. “With the little ones, the parents bring them, but when you see the same teens come in every day because they want to be there, then you really know you’re making an impact.”

Besides spending nine weeks of the summer and two to three hours after school with kids, BGC staff is trained to look for abuse, monitor children’s emotional and mental stability and understand triggers.

“As part of this program, we have to understand the needs of each of these kids,” Trent said. “We spend a lot of time working with families and with parents so we understand what’s going on with them.”

The club works with families from every socioeconomic status, including foster families, single-parent households and guardians who are raising kids. All kids are welcome, and scholarships are available.

“Knowing that your kid is safe here and in an environment where the people absolutely love them is vital,” Trent said. “And they do.”

Gauderman agreed. “Oh, we do. They’re our babies.”

“They love the kids like you wouldn’t believe. And there are some times when that means a call to the police department or DHS. Those are never fun, but we spend a lot of time on child safety,” Trent said. “We have policies out the kazoo on child safety, and every one of the programs we do requires extensive training. Staff is constantly learning.

“Every one of these kids, every one of our staff, has a story. It’s their story, and they own it. A big part of what we’re doing with the kids is teaching how they can tell that story, but do that in an appropriate way. … For the kids who have been physically or sexually abused, it’s teaching them how to move from being a victim to a victor. It takes an enormous amount of patience.”

“You never know what’s going to happen, and you can’t prepare for every situation, but being prepared as we are, we know we’re going to be able to keep our kids safe,” Gauderman said. “We just love them, and we support them. It’s the place to be.”

Likewise, staff feels supported in turn by the community that surrounds the club.

“Without the support of the community and of the local foundations, we wouldn’t have a Boys and Girls Club,” Trent said.

“Our challenge constantly here is not having large corporate accounts, which means about 75 percent of our funding comes from local donors and businesses. Because a lot of other clubs are funded on grants and large corporations, when the money runs out, they have nowhere to go. Their challenge is raising money from the local community,” Trent said. “When BGC of America sees our funding and how balanced it is, and that the majority of our funds come from the local community, they are amazed. And that has been, quite frankly, the only reason we have this club. …

“That’s why we spend all our time out talking in the community and working with these kids to make sure that message gets across. We are really fortunate.”

And the youth are internalizing BGC’s message. When they go home, they help with more chores, engage with their families and thrive at school.

“The whole concept of what we’re trying to do, again, is the life skills,” Trent said. “The approach that we’re using is teach them, show them, have them demonstrate back and then have them teach. … What makes the program successful is having them teaching us and others, and then taking it home. We can see those things happening. We just have to keep teaching them their problem-solving skills. If we can do that, these kids are going to do well.”

For the youth at the Teen Center, summer hasn’t been just about lessons or planning for the future. Like the Elementary Program, the teens get to go on field trips throughout the area, eat fun snacks and find time to just be kids.

“I live out on Woahink,” Trent said. “On Wednesday, I brought the teens to my house on the lake, where we’ve got kayaks, standing paddleboards and a paddle boat. We got to get the boat out with the tow toys. The kids just loved it.”

Besides the nine-week Summer Brain Gain, BGC is also partnering with Terry Tomeny of Aero Legends for the third annual Florence Air Academy, which begins on Aug. 5. For more information, visit bgcwlc.org.

“Boys and Girls Club is organized, open to every child, feeds kids and is here every day,” Trent said. “I don’t know of any other program in our area that does that. That’s the reason we do what we do every day.” 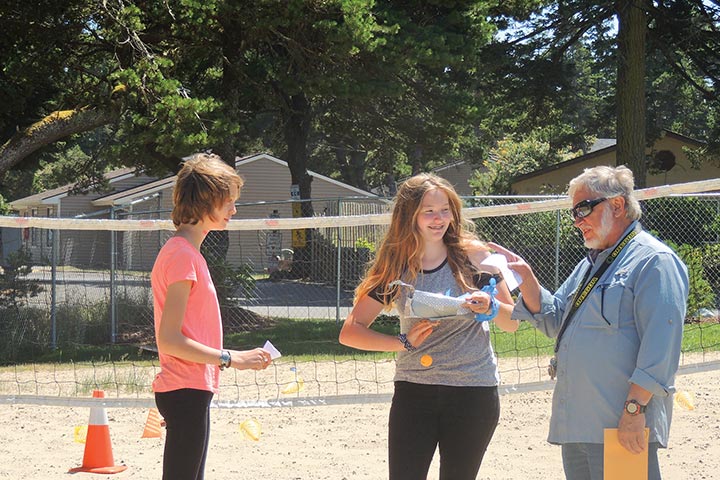 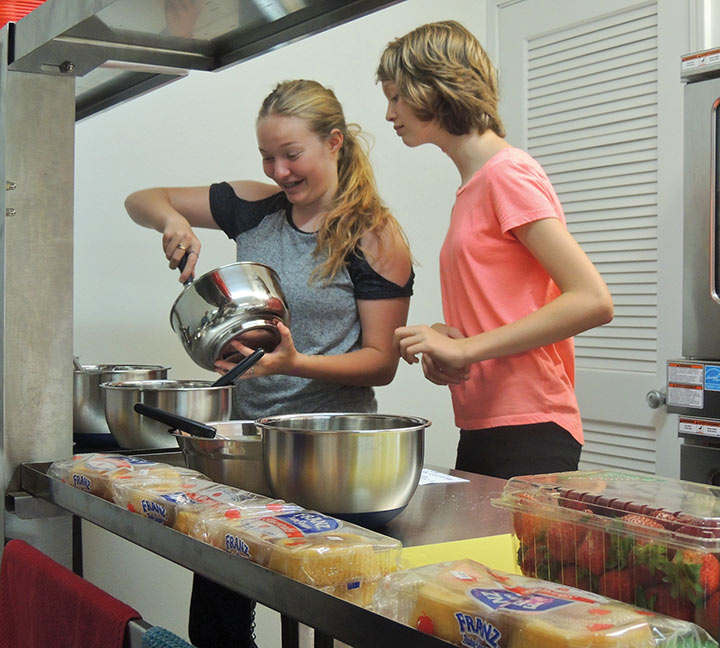 Comfort from the cold