Jan. 30, 2019 — The 2019 Florence Winter Music Festival took place at the Florence Events Center (FEC) this past weekend, featuring bluegrass, Americana, folk and gospel music as well as local art and community concerts. The event was presented by Sea Lion Caves and produced by the Friends of the FEC.

“It went shockingly well,” said Rachel Pearson, Winter Music Festival chairperson. “It was what a festival is supposed to be within the space of the FEC.”

The festival kicked off with the annual Kids Concerts, hosted by the Kiwanis Club of Florence with additional sponsorship. These lively performances bused in nearly 900 students from Mapleton, Reedsport and Siuslaw elementary schools.

Pearson thanked Siuslaw Elementary Principal Mike Harklerode and his staff for organizing the logistics for seating and buses for each of the shows, as well as the teachers and bus drivers from each school in attendance.

At the start of the concert, she told the enthusiastic students, “If you want to clap, you can clap; if you want to bounce in your seat, that’s OK. No one has hit the ceiling yet.”

Katie Jane Lubiens returned to play the Kids Concerts like she has in the past, bringing her bandmate Adam Easley. They encouraged the kids to “tap tap tap their feet” like fiddle players do while they played a French-Canadian tune.

“In the very first song, one little girl yelled, ‘It’s awesome!’ It was a shout of joy,” Pearson said. “You can’t make a kid say that. It was spontaneous.”

Lubiens and Easley also brought an “instrument petting zoo” from Kennedy Violins in Vancouver, Wash., for the students to interact with real instruments.

On Friday, Lubiens and Easley played during the lunch period for Siuslaw Elementary, again bringing their instruments.

Lubiens’ high-energy fiddling was a great start to the festival weekend, which featured themed shows each day along with familiar and new performers.

Friends of the FEC President Kirk Mlinek said, “Bluegrass fans come to something like this expecting crisp harmonies and great instrumentals delivered in a traditional style, and that’s what they got on Friday night. It was really heartening to see that there are bluegrass fans and that kind of traditional music fan sitting out there. We’re clearly filling that niche for the Oregon coast.”

“It was very successful,” Pearson said. “Claudia Brown and FRAA did a great job of organizing that and making it attractive and welcoming.”

According to Mlinek, the arts festival brought “a good vibe and good energy” to the FEC.

Curated artists showed textile arts, art craft boxes, beadwork and more. This included elementary poets and weavers, who gave demos from their booth throughout the day.

In addition, Pavilion Catering provided food and beverages throughout the weekend. The other food vendor was Eatwell Organic Noodle, a new food truck for the Florence area, which was kept busy as people tried its ramen bowls. According to its Facebook page, the food truck plans to open more officially in February.

“On Saturday, we always give a nod to fan favorites and we like to bring back some familiar faces,” Mlinek said.

More familiar faces rounded out Saturday as the evening headliners took the show. Chris Kokesh and LJ Booth brought “a nice, mellow way to start the evening with a nod to the traditional folk sound,” Mlinek said.

The headliner was John McEuen and The String Wizards. While McEuen, founding member of the Nitty Gritty Dirt Band, has played at the Winter Music Festival before, his appearance as part of the Will the Circle Be Unbroken Tour brought something unique to 2019.

“He’s quite the entertainer and has a real professional band,” Mlinek said. “To do a sell-out show like they did was very heartening.”

“We’re very thankful to Laura Merz and Marty Adams to put together the Community Gospel Choir and the Rolling River Quartet,” Mlinek said.

These local performers lifted voices in traditional harmonies, priming the audience for the award-winning University of Oregon Gospel Choir, led by Andiel Brown.

“If you didn’t hear Andiel Brown, you certainly missed what we call the ‘rafter-raising’ conclusion to the show — when the volume went up and the energy just rose,” said Mlinek. “It brought the whole festival to a great conclusion.”

Music didn’t end each day at the doors of the FEC, either. Three acoustic music jams gave performers the chance to interact with the local community and make impromptu sounds together.

“Acoustic instrument musicians just love jamming together,” Mlinek said. “I’m a longtime jammer, having attended hundreds in my lifetime as a guitar player and bluegrass singer. I did get down to ICM and it was quite the party going on. ... People were singing and whooping it up.”

Pearson said that some performers went to every aspect of the Winter Music Festival.

“When people are really into performing, they just kind of give everything up and just go for it. … They’ll do any kind of work they can do to make it happen,” she said.

She added that many performers’ enthusiasm extended beyond their own sets to promoting the other groups and attending the jams.

“That is so neat to see, sort of like that old fashioned ‘let’s throw this barn together’ and let’s help out,” she said. “It’s that kind of spirit that’s really wonderful to see. It’s not that rare in Florence, but it is kind of rare in our world.”

Other people who helped the Winter Music Festival “raise the barn” were the event sponsors and the many behind-the-scenes people. Pearson described the active group of volunteers from the Friends of the FEC, the events center and the community as “self-propelled” when it came to making sure that everything got done — often before she or other organizers saw a need.

“They were running from one end of the FEC to the other doing everything,” she said.

This year, the music festival committee made sure that the volunteers felt appreciated by providing meals to everyone who put in at least four hours of work.

“They are doing jobs silently in the dark,” Pearson said. “We were all out there working and then we could come together with a meal. It felt like an old-fashioned family reunion. There was a lot of laughter and stories and remembering Leah Goodwin and people who are gone.”

Volunteers in the lobby sold event merchandise and handed out surveys to festival attendees. While some of those are still being tallied, Pearson said, “So far the comments are really positive: ‘great pacing,’ ‘loved the art fair,’ ‘loved the food.’ There are always glitches, but sometimes we experience a weekend like this and say, ‘Wow, this is why we do this. To make people happy and bring them joy.’”

“As festival organizers, we’re all on cloud nine post-festival,” he said. “We hope that our concert-goers are too. We’re very pleased with the local audience coming out to support our lineup. I also talked to a lot of people who came from considerable distances.”

“They came down because of our stellar lineup and because the other things that were going on. I’m sure the good weather helped as well. We’re very pleased with the turnout,” he said. 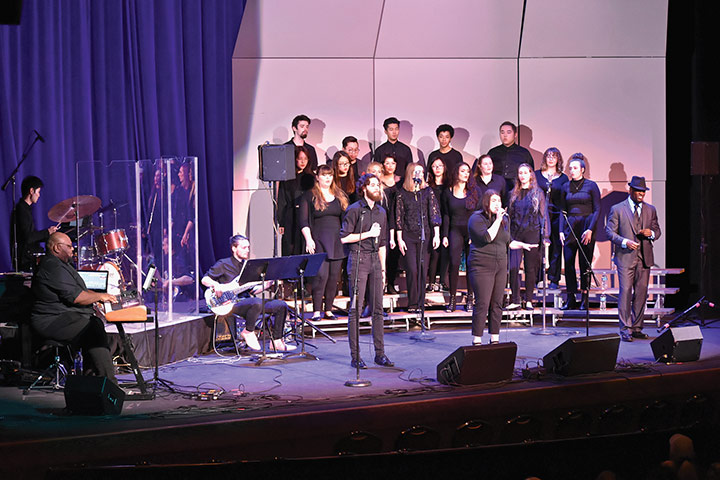 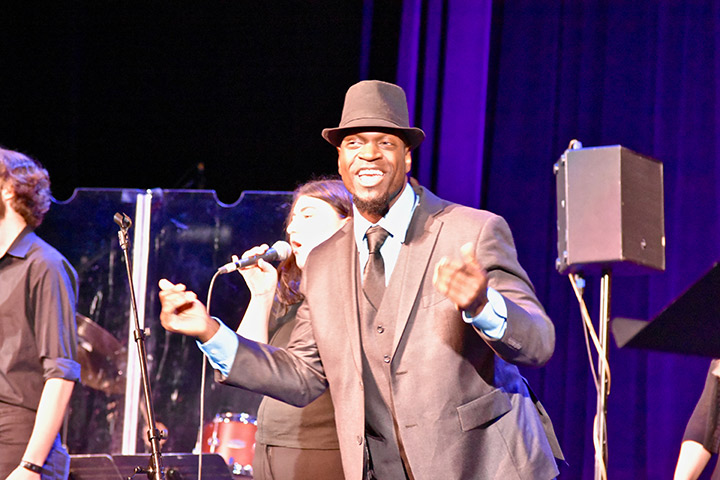 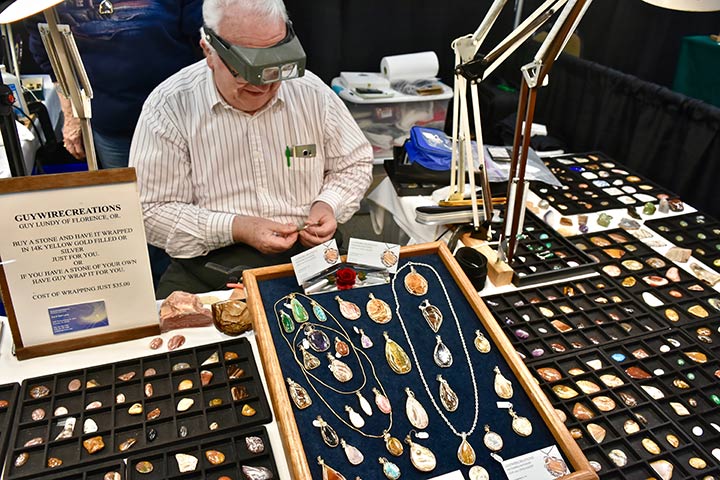 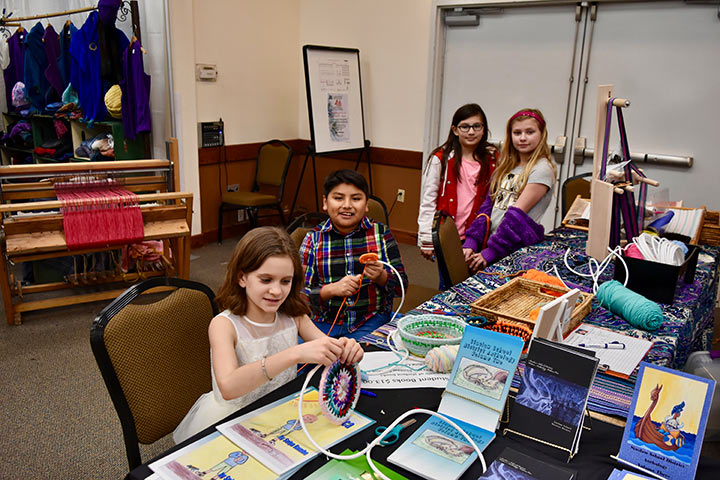 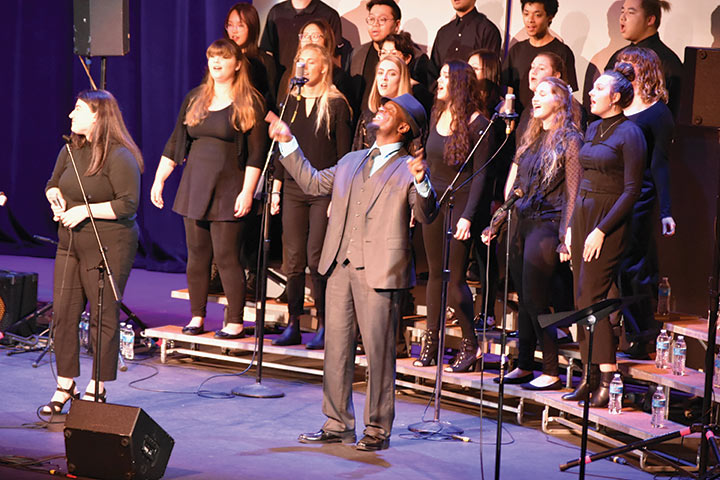 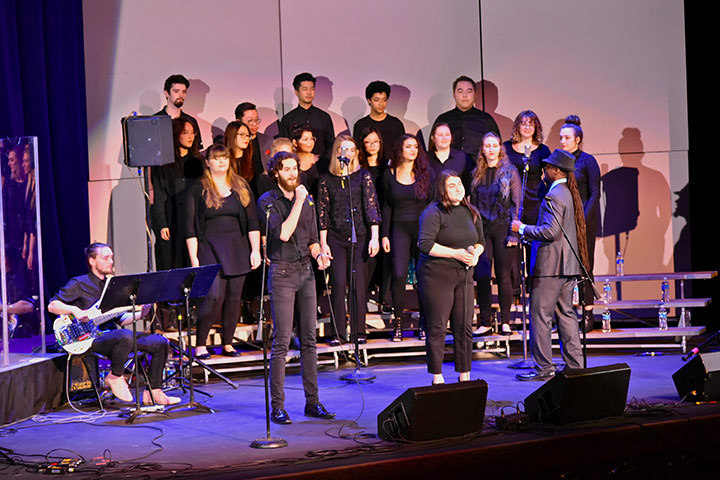 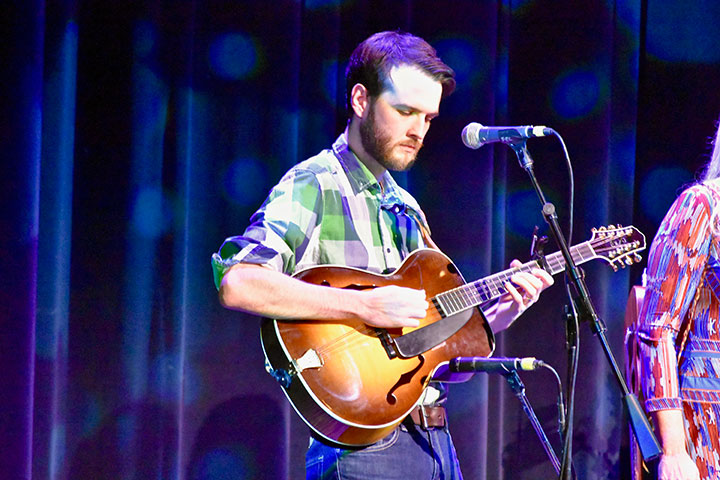